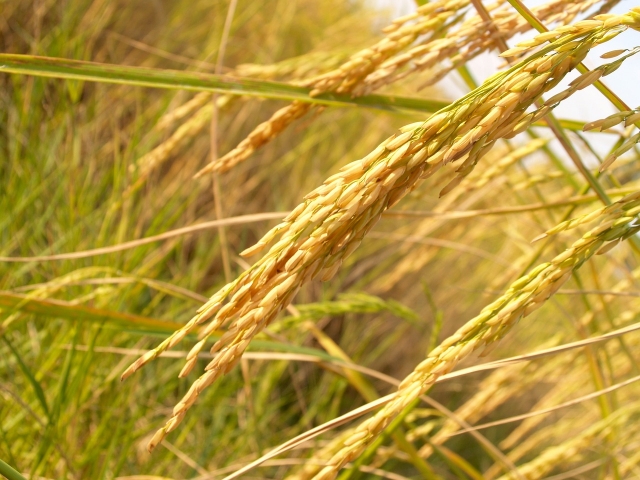 Rice (Oryza sativa) has been genetically modified to produce beta-carotene in order to improve the supply of vitamin A.  Carotenoids are a precursor of vitamin A and give the rice its yellowish color and the name Golden Rice. Naturally, peeled rice grains contain no carotenoids.

With rice as a staple food for over half the world's population, the so-called Golden Rice should help combat vitamin A deficiency, a serious problem in different developing countries.

The International Rice Research Institute (IRRI) is currently reviewing the characteristics of the genetically modified rice, including its safety and suitability for human nutrition.

Despite 25 years of research and development, no Golden Rice-varieties are available today that are suitable for commercial cultivation.

Introgression of the provitamin A trait from transgenic Golden Rice into a commercial, high yielding Indian rice variety leads to an array of unintended effects, a new study finds.

Golden Rice is genetically engineered to produce beta-carotene, a precursors of vitamin A, aiming to combat vitamin A deficiency. A new study now finds, that backcrossing of the genetically engineered Golden Rice, with the Indian mega rice variety Swarna, leads to morphological changes such as pale green leaves, a reduced plant height and a drastic reduction in yield.

The researches found that the transgene was inserted into an active region of the genome, thereby disrupting the coding sequence and ultimately the function of the plants own OsAux1 gene. The OsAux1 gene is involved in the transport of the hormon auxin, which is important for virtually every aspect of plant growth and development. The researchers also report a lower Chlorophyll content in the backcrossed plants, which probably causes the pale green leaves.

As a result the Golden Swarna lines are unifit for commercial cultivation the study concludes. These findings are on the one hand relevant for the risk assessment of the transgenic plants: once released, these plants could spread to other rice varieties and endanger rice harvest. On the other hand they show yet again that despite many years of research & development (R&D), the Golden Rice project has not yet produced a commercially viable rice line rich in provitamin A. Instead of investing in R&D that favors industrialised agriculture and corporate control over seeds, the root causes for hunger and malnourishment, such as rural poverty and access to markets, should be tackled.

UCCSN-AL questions the neutrality and objectivity of the letter from Nobel laureates that urges Greenpeace to end its opposition against genetically modified crops, especially golden rice. They also point out the lack of robust and well founded arguments.

In their statement, UCSSN-AL confutes the claims that GM crops have higher yields and can contribute to the goal of ending world hunger. Instead, the main GM crops marketed today are mainly used for the production of biofuel and animal feed.

Golden rice, which is not commercialised today, is intended to synthesize beta-carotene - a  precursor of vitamin A - and help the fight against vitamin A deficiency. However, UCCSN-AL says, malnourishment is related to poverty and loss of food sovereignty and not to the lack of a specific nutrient. On the contrary, this rice would contribute to the undermining of traditional food systems and increase large-scale monocultural production, corporate control over seeds and genetic uniformity.

They further point out the great importance of genetic diversity and traditional varieties to combat hunger and negative effects of climate change. Rather than investing in the promotion and implementation of golden rice, this money could be used to promote crop diversity and strengthen local and regional nutrition and food sovereignty.

No One Served: Who Is to Blame for the Failure of GMO Golden Rice?

At the end of June 2016, a number of Nobel laureates accused Greenpeace’s campaign against Golden Rice as a „crime against humanity“ and called upon governments around the world to „do everything in their power to oppose Greenpeace’s actions and accelerate the access of farmers to all the tools of modern biology, especially seeds improved through biotechnology“. In their article Millions Spent, No One Served: Who Is to Blame for the Failure of GMO Golden Rice? published in Independent Science News, Angelika Hilbeck and Hans Herren show disappointment in the letter’s emotional, accusing language and the use of scientifically unsubstantiated claims. They offer 5 facts that show why golden rice is failing and why this concept is generally no solution for world hunger.